Lesson Plan Eaters of the Dead: The Manuscript of Ibn Fadlan by Michael Crichton


Eaters of the Dead: The Manuscript of Ibn Fadlan by Michael Crichton Lesson Plans by BookRags

Eaters of the Dead: The Manuscript of Ibn Fadlan by Michael Crichton | Summary & Study Guide

These depictions do not necessarily result in starkly negative images of the Saracen. Nickolas Haydock and Edward L. Jack G.

(17) Kyle reviews Eaters of the Dead

Eaters of the Dead: The Manuscript of Ibn Fadlan by Michael Crichton Lesson Plans

How fitting then that in Eaters of the Dead he returns to the legend of Beowulf, one of the primal tales of dread from the murky Anglo Saxon past. In one of Crichton's friends, a college professor, joked about teaching a literature course on "The Great Bores", among which he counted Beowulf. Crichton laudably came to the defense of this classic see Orrin's review and decided to try and retell the tale for a modern audience. Eventually he decided to move the setting of the story forward in time to AD so that he could have a historical figure, the Arab traveler Ahmad Ibn Fadlan, narrate it.

Ibn Fadlan was an emissary of the Caliph of Bagdad who came into contact with Vikings during his journey into modern Russia and left behind a manuscript detailing his experiences.

For the purposes of the novel, Crichton has him meet up with a band of Northmen lead by the warrior Buliwyf just as they have been summoned to Hurot Hall to help King Rothgar repel the mysterious and terrifying Eaters of the Dead, a horde of seemingly demonic beasts who attack under cover of night and fog. A soothsaying crone insists that he accompany them as the 13th member of their party. 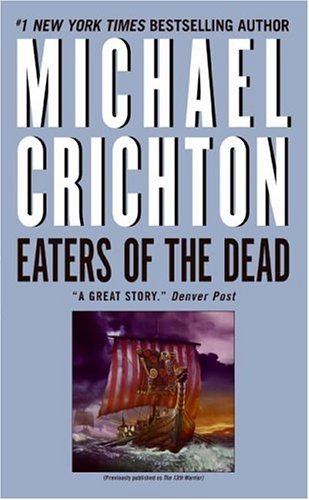 I thought that it took Crichton a little too long to set the stage here, particularly for such a short book, and the technique of casting the tale in Ibn Fadlan's voice and style makes for a somewhat archaic narrative. But once the action gets going it is great fun.


I read the book after seeing the movie version, The 13th Warrior , which though it got decidedly mixed reviews I enjoyed greatly. Basically what you've got here is a combination of Beowulf and The Magnificent Seven with a smidgen of anthropology thrown in for good measure; what's not to like?